Shades of the Orient 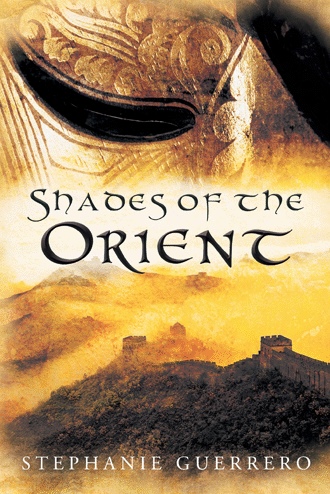 A rough hand pressed firmly against Francesca’s mouth and a strong arm slid about her waist pulling her into the shadows. She repressed the urge to scream. Her mind scrambled to ascertain the identity of her captor… the Filipinos… the Spanish soldiers she had encountered the day before on the road… or … her mind panicked at the last and most horrifying thought… Capitan Molino. She struggled to free herself, every muscle in her body resisting her captor’s hold. He tightened his grip and pulled her still further into the jungle. Finally satisfied that that they were alone, but with his hand still firmly covering her mouth, he wheeled her about to face him.

The sight of the tall familiar form in front of her made Francesca’s heart leap in relief as her rescuer, Comandante Trevino slowly released her from his grasp.

“Are you always so disobedient? You can certainly be a handful, Senorita. You put up quite a struggle." Are you this way with every man or only those who grab you against your will?” The teasing in his voice was unmistakable, and Francesca’s eyes lit with temper.

“What did you expect… for me to go quietly with any man who drags me off into the jungle?” Enrique’s brow lifted and he scanned her mischievously. “So you would not go with just any man… but if you had known I was your captor you would have allowed me to drag you into the jungle?”

She fumed and blushed simultaneously. Such impudence!

Without warning, the Comandante brought his hand to her mouth once again and pressed her firmly against the rough trunk of the giant tree. A moment later he eased away from her and motioned for her to hide in a small hollow a few feet from where they stood.

"Stay." He commanded quietly. “Do not venture out no matter what you hear until I return.” His gaze turned thoughtful and he paused before turning to leave. “Can you shoot?”

Francesca nodded as he pulled a pistol from his shoulder holster. “Use it. Kicking and flailing is not always enough.” A slight grin flickered across his face as his eyes held hers. “…Just make sure who you are aiming at first.” Then he disappeared into the jungle.

In this action-packed suspense in the exotic Orient, a classic tale of good versus evil—spies, smugglers, and betrayal—who will be unmasked?

Black Jade is many things. Hiding behind a prominent name by day and a Chinese mask by night, he can be anyone—just not the man he wants to be. Trapped in an ever-tightening web of deceit and pursued relentlessly by the White Dragon, he must choose which man he wants to be. When a way out is offered from a surprising source, will he choose power or let it go?

A Spanish officer, a black market dealer, a shipping executive, an intelligence officer—Philip Montero is skilled at wearing masks to defeat the enemy, but this time he must face the enemy within. Plagued by nightmares, he must unlock his past in order to survive. Time is running out, though, and Black Jade has targeted the woman of his heart. Betrayed by his family, his former fiancée, and his fears, who can teach him how to trust again?

Shipping-heiress-turned-missionary-nurse Francesca McRae is a target everywhere she turns. Desired as an heiress by power-hungry men and hated by the Chinese Boxers for her interference in the culture, she is surrounded by deception and hatred. None of her suitors are who they seem, yet one has stolen her heart. When loving others becomes more than she can handle, who can she trust?

Where do you turn when life is too much to handle?

Stephanie Guerrero holds her bachelor’s degree in interdisciplinary studies, specializing in reading. A former middle school reading teacher, this pastor’s wife and homeschooling mom of four has a passion for the redemptive, life-changing impact of a great story. Her husband of nineteen years is her delight and inspiration.